Today, I decided to lighten things up a bit and share with you five weird auto insurance claims. Enjoy….

1. Are you missing something?

While living in Texas, my friend Bruce was driving on an interstate in his giant Lincoln Town Car when he struck a couch that had been sitting in the middle of the highway causing damage to the front end of the car. Of course, I found it ironic that this “couch on wheels” actually hit a couch! The car was still drivable and an angry Bruce headed up the highway again. A couple of miles up the road, there was a pickup parked on the side which contained other pieces of furniture in the bed of the truck, some of it with the same cloth and pattern as the couch. Bruce immediately pulled behind the truck and confronted the driver and her passenger about the lost couch. Unbelievably, they both denied any knowledge of the couch!

While visiting my big brother in Texas (yes, the lone star state again), I drove a rental car from the Dallas/Fort Worth Airport to his house in Fort Worth. As I pulled into his driveway, I immediately noticed that his car looked like a golf ball! The entire vehicle was dimpled the same way as a Titleist! While we deal with wild fires and the occasional earthquake in Southern California, we don’t get hit with the massive hailstorms like the ones they see in Texas. Amazing looking as it was, my brother’s car was just one of many driving around in the area that looked the same way. When the hail storm hits, drivers scatter to take cover under bridges, overhangs, or anything else to shield the car from the large chunks of ice. And as you can imagine, there are thousands of glass claims after a hail storm. What really amazed me though was the fact that my brother had an appointment at the body shop in August, a full six months away! Because of supply and demand, he was forced to drive this golf ball (sorry) for six months looking like that! 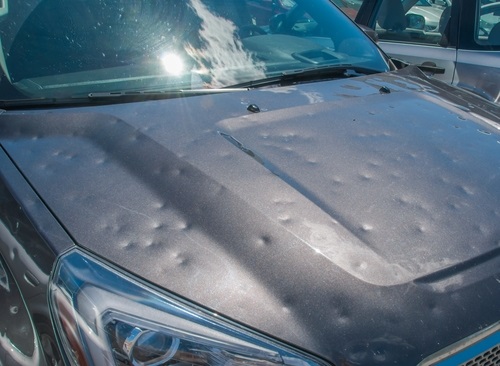 This next one is a case of really bad luck on the part of the driver. This guy has a low impact collision with the car in front of him. The collision was hard enough to break the taillight of the car in front of him. As he pulled the car back in order to access the damage to both cars, he backed into the car behind him. Then to make the day that much sweeter, he opened his car door and hit  a passing bicyclist! Unfortunately for this poor guy, that works out to be three separate claims! The guy should have stayed in bed.

4. One man's "trash" is another man's treasure.

Many years ago, a young wife decided to take her husband’s “hippie van” in to have a fold down bed installed in the back.  The next day, she was notified that the van had been stolen from the shop. Totally distraught, she received a whopping $600 from the insurance company which is actually about what the old van was worth. Fast forward thirty five years and the U.S. Customs Department found the fully restored Volkswagen van in a shipping container earmarked for the Netherlands. The insurance company was able to recoup $25,000 for this classic vehicle!

This last one isn’t funny and was a real learning experience for me. One of our really nice clients lent a vehicle to a good friend of hers for a couple of days. The problem occurred when the “friend” decided to drive to San Francisco and keep the car for himself. The police department refused to classify the car as stolen and the insurance company denied the claim for a stolen vehicle because this nice lady handed the car keys to her “friend”. Of course, I thought that this whole situation reeked and was entirely unfair to my client but the insurance company would not budge on legal grounds and for the same reason, the police department would not touch her friend. She never got the car back and the “friend” kept it with no repercussions.